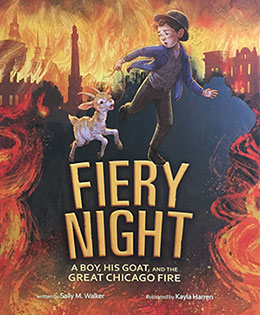 Fiery Night: A Boy, His Goat, and the Great Chicago Fire

When Justin But­ter­field went to bed on Octo­ber 8, in 1871, he had no idea that a ter­ri­fy­ing event would com­plete­ly change his family’s life before sun­rise.  The Butterfield’s home was engulfed in flames as fire swept through the city of Chica­go.  But Justin’s feared more than los­ing his home.  He was scared his pet goat, Willie, might die.  Justin knew it was up to him to save Willie.

Justin But­ter­field was a real per­son. He was 11-years-old at the time of The Great Chica­go Fire. Fiery Night was inspired by a let­ter that Justin lat­er wrote to a friend.  Justin’s let­ter and the draw­ing that accom­pa­nied it are archived in the Chica­go His­tor­i­cal Society.